Modern police work needs allies. One of the policeman’s key allies is the doctor. His work ranges from examining alleged drunks to attending injured policemen or prisoners. Sometimes he must not only certify death but give an opinion on its cause. The doctor’s work for the police is dramatic, but the public know little about it.

Julian Bond, who wrote several of the Probation Officer scripts, is writing most of the episodes for the new series, in collaboration with J. J. Bernard, the pseudonym of a London police surgeon who suggested that the work would be an ideal theme for a TV series.

The young, idealistic Dr Brent cannot resist taking a personal interest in the cases to which he is called, for at heart he is a philosopher. 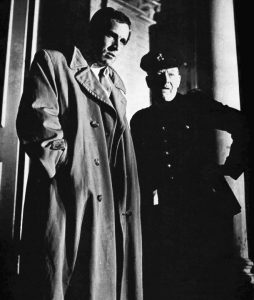 First of the 13 stories, many based on fact, is titled “Easy Money.” In it Dr Brent deals with a young thief, played by 18-year-old Michael Crawford. The second episode, “Under the Influence,” deals with a motorist, played by Bernard Archard, accused of drunken driving.

Other early episodes star Harry H. Corbett as a man who beats up a club hostess in “Lag on the Run” and Jean Anderson in “Sunday Morning Story,” which deals with a refugee girl’s suicide.

Appearing in several episodes with Ian Hendry is John Warwick, playing Inspector Landon, of the Bayswater area police station, to which Dr Brent is attached. Another artist who will be seen in several episodes is Ingrid Hafner, the surgeon’s receptionist.

The theme music has the appropriate title ‘The Big Knife.” The first four episodes of Police Surgeon are being produced by Julian Bond and the rest by Leonard White. Bond, 29 years old, has been writing for TV since 1957. Before that he was writing and directing documentary films. He is married and has three children. 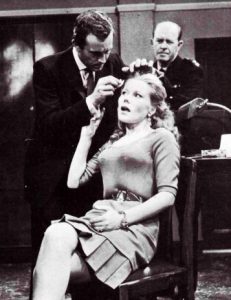 Ian Hendry is the same age as Bond. He made his TV debut some years ago stooging for the famous clown Coco. The clown tried to persuade Ian to use his talent for knockabout comedy in the circus, but his gift for acting led him to the stage.

Bond chose Ian to star in his new series after watching his progress for three years following an impressive performance in Anouilh’s Dinner with the Family, which brought him to London with the Oxford Playhouse company.

At school at Culford, Suffolk, Ian’s main interest was sport. During National Service with the 32nd Medium Regiment, RA, he paced Chris Chataway and organised his own motor-cycle stunt team.

Ian went from the Central School of Speech and Drama into repertory. About the same time he was cast in Emergency — Ward 10, and established a following as Chris Stone, a polio patient. Film parts followed in Room at the Top, Sink the Bismarck and In the Nick.

Last spring he was back in TV as the young pilot whose error caused the death of a friend in Inside Story, and since then he has had further TV successes in Probation Officer, Eugene O’Neill’s Beyond the Horizon and Flight from Treason.

To celebrate this series Ian and his wife Jo, who teaches film and television make-up, have moved to a new home aboard a converted naval pinnace on the Thames at Chiswick.

Bill Evans was a journalist at the TVTimes