The ABC Midlands and North presentation schedule for 28 July 1968

ABC in Didsbury had a family atmosphere. An active social club, a subsidised in-house canteen, a good working environment… it’s rare to find anybody who didn’t love working there.

One such person was John Ranson, so much so that he kept many mementos of his years at ABC in Didsbury.

Amongst them is this ABC Television transmission schedule for Sunday 28 July 1968, ABC’s last day on air in the north and midlands before management upped-sticks and moved to London to become the dominant half of Thames Television on 30 July. 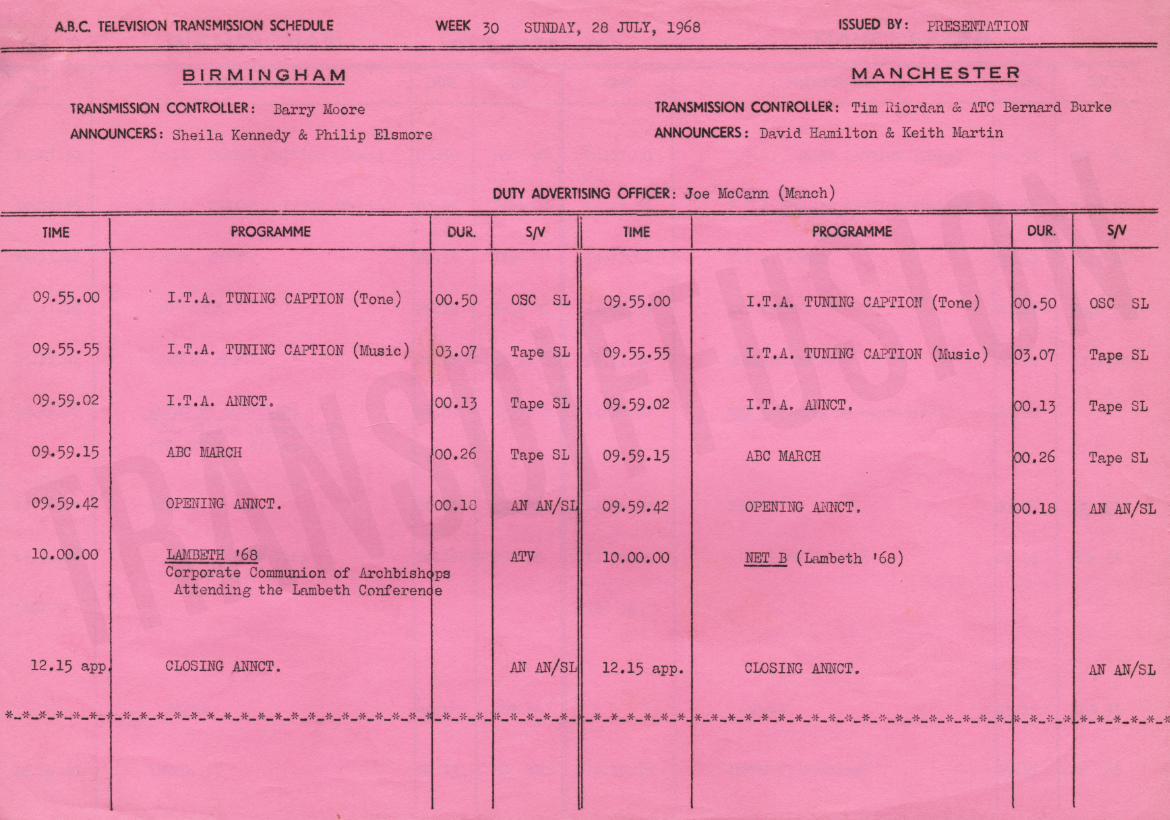 With a system as complicated as ITV, where there were over a dozen companies serving around 20 distinct advertising areas, swapping some programmes, timeshifting others, networking still more, there was a lot of admin work. The key to the administration of ITV was the use of transmission schedules, detailing down to the second what each company would be doing when. 18 seconds for an announcement here, 28 seconds of commercials there, programmes coming in from one company, programmes going out to another… the transmission schedule governed them all.

For ABC’s last day, John made sure to get a copy of the schedule to keep – he worked in the lines department, supervising the feeds coming in and going out along General Post Office co-axial links as well as ITA microwave connections, so he was entitled to have one. More than that, he popped round and asked staff on duty to sign it, turning it from a memento for him into an important historical document for us 50 years later. 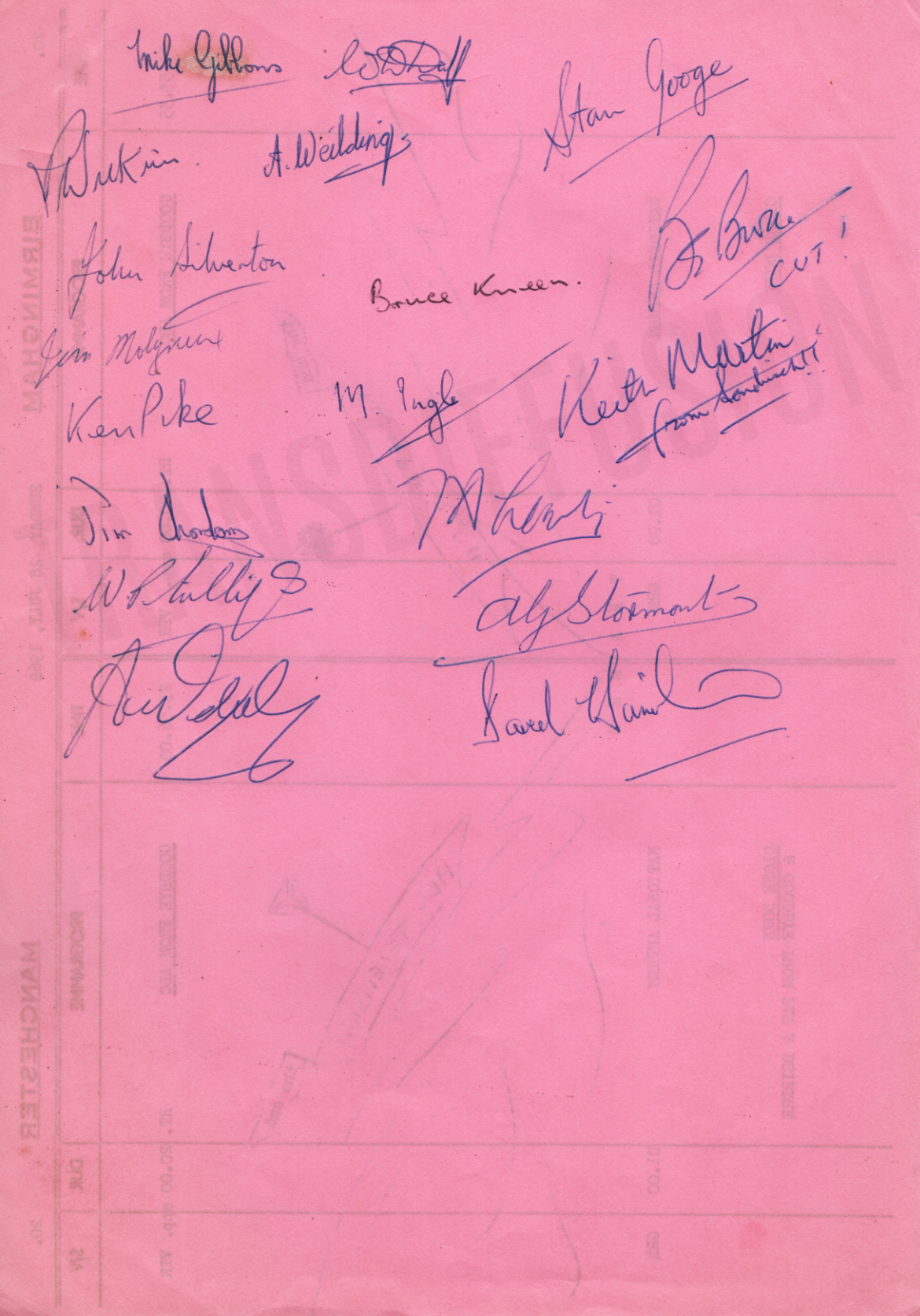 The end of ABC meant upheaval for all staff, even those who would still be doing the same jobs in at the same desks in Teddington as the hours of broadcasting changed. This disruption would lead to strikes and lockouts taking the entire ITV network down in August, but for now it was time to say goodbye.

For administrators Pat and Deirdre, charged with collating this document, typing it up and producing Gestetner cyclographs for everybody who needed one – across the entire network – saying goodbye was done on the last page, with a jaunty drawing of Rediffusion and ABC saying goodbye while Thames emerges beneath. 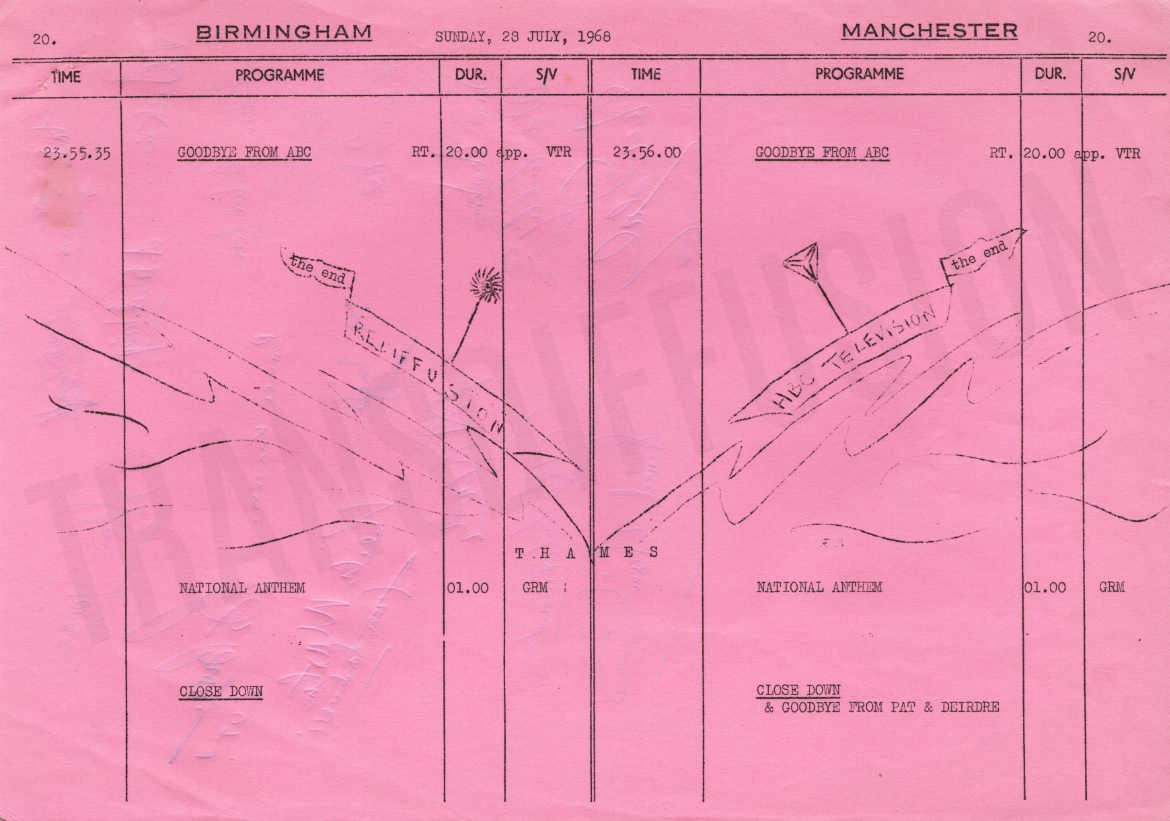 From memento to historical document to a thing of beauty across 21 pages and 50 years, it’s worth reading in full just to see how complicated and planned television was and is, and how the people behind television usually are the people who love television most.