When a voice becomes a trademark and earns the weekly wage, it should be kept in first-class order, thinks John Benson. He is one of ABC’s team of announcers who, with Michell Raper, works alternate weeks in Birmingham and Manchester. 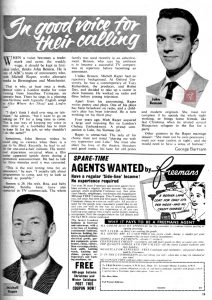 That is why, at least once a week, Benson visits a London studio for voice training from Jonathan Tremayne, an operatic bass. There he sings in a pleasing bass-baritone such typically English songs as Alice Where Art Thou? and Linden Lea.

“I don’t think I shall ever sing on television,” he admits, “but I want to go on talking on TV for a long time to come. This is one way of keeping my voice in trim. After all, a footballer has to train to keep fit for his job, so why shouldn’t I do the same?”

Sometimes, John Benson wishes he could sing to viewers when there is a gap to be filled. Recently, he had to ad-lib for one-and-a-half minutes. His worst-ever experience occurred when a film trailer appeared upside down during a promotion announcement. He had to talk for three minutes until it was corrected.

“This is a real testing time for an announcer,” he says. “I usually talk about programmes to come, and try to look as relaxed as possible.”

Benson is 28. His wife, Rita, and baby daughter, Sandra Jane, have also appeared in TV commercials. The whole family was used recently in an advertisement. Benson, who says his ambition is to become a successful TV compere, was in repertory before becoming an announcer.

Unlike Benson, Michell Raper had no repertory background. At Oxford University, he was a contemporary of Tony Richardson, the producer, and Robin Day, and decided to take up a career in show business. He worked on radio and films before joining television.

Apart from announcing, Raper writes poetry and plays. One of his plays has been broadcast on radio, and a children’s play has been televised. He is now working on his third play.

Four years ago, Mich Raper acquired a large and imposing flat on London’s Chelsea Embankment. A prized companion is Lulu, his Siamese cat.

Raper is unmarried. The lady of his choice must not mind “sharing me with my typewriter and Lulu.” She must also share his love of the theatre, literature and good music; his taste for old prints and modern originals. She must not complain if he spends the whole night working, or brings home friends, like last Christmas when he invited several Hungarian refugees to the flat for a party.

Other pointers in the Raper marriage dossier: “She must not be over-possessive; must not wear curlers at night; and she would need to have a sense of humour.”

George Bartram was a features writer for the TVTimes.