ABC’s achievement on Sundays, though, was to prise open the ‘closed period’ at 6.15-7.00 p.m., when all television was off the air. Originally the Government’s official hours of broadcasting forbade transmission between 6.15 and 7.30 p.m. on Sundays because religious interests had claimed that television would reduce church attendance, but after a time BBC and ITV were permitted to broadcast programmes of serious discussions on religious themes from 7.00 to 7.30.

Every hour was precious to ABC on Sundays and I set out to devise a programme with religious content which would cater for the millions of young people who were at home between 6.15 and 7.00. The challenge was to make religion interesting and informative to teenagers and my mind went back to my own upbringing in Monmouthshire. My father was superintendent of the Congregational Sunday School and in addition to the ordinary services there was a free-and-easy meeting between teachers and young people described as PSA (Pleasant Sunday Afternoon).

This was to be my formula for a place and an occasion when people could meet and talk and socialise with Christian speakers. I decided to start a television youth club, with a six-piece band, singers and lively talk, including guests ranging from sportsmen and pop singers to archbishops.

First I had to convince the Authority and afterwards CRAC (Christian Religious Advisory Committee). I found the Committee particularly receptive because they had appreciated by now that commercial television had tackled religious subjects in earnest, and our professional techniques applied to the religious message were attracting audiences far outnumbering church attendances. The Authority was more hesitant, but it was decided that if I could satisfy their new member they would give their support. This was Diana Reader Harris, the headmistress of Sherborne School for Girls, no stranger to me because both my daughters had been educated at her school. After full discussion she was in complete agreement with my objectives and my proposals for producing the programmes. 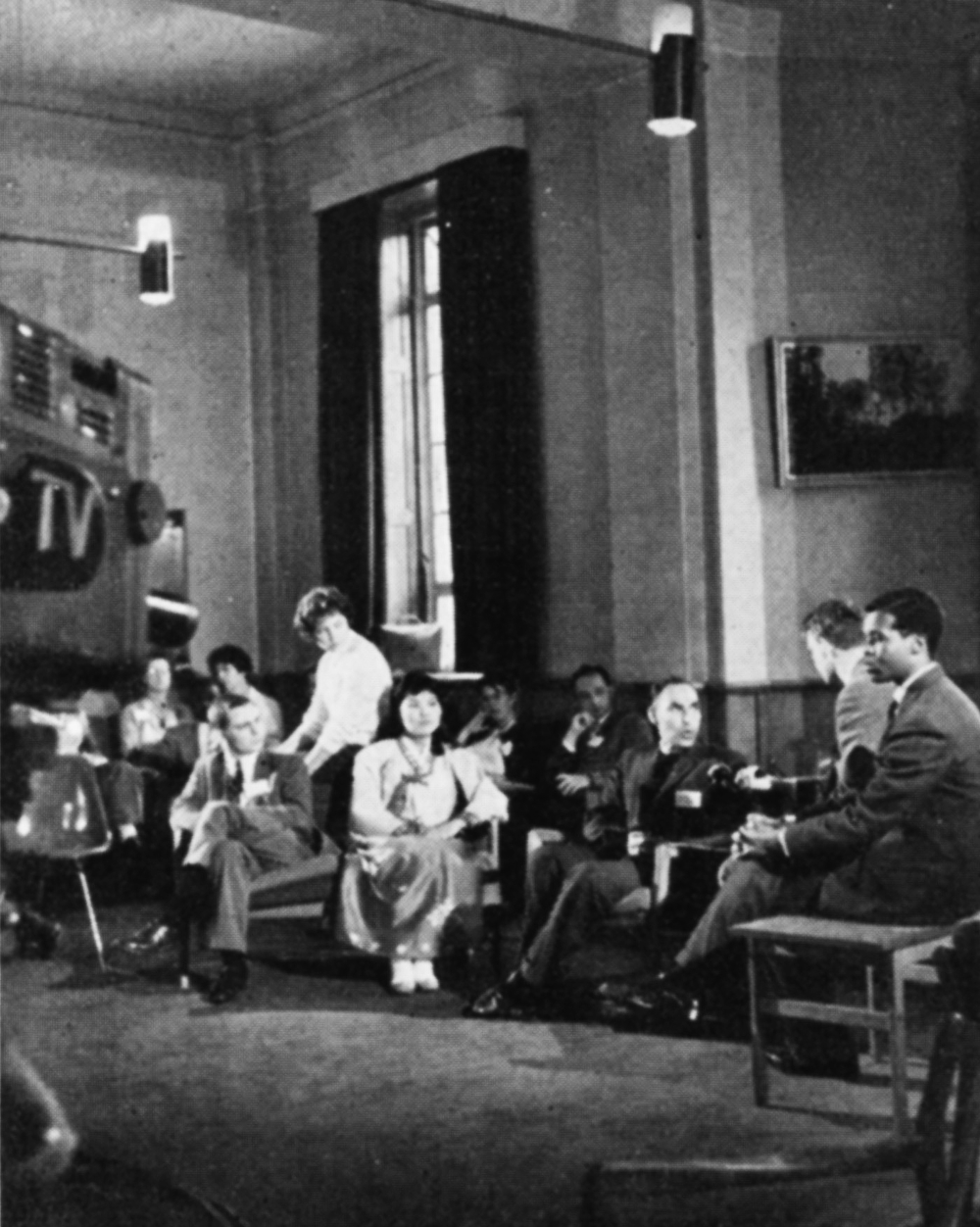 A discussion underway on ‘The Sunday Break’

‘The Sunday Break’ features the Freedom from Hunger campaign 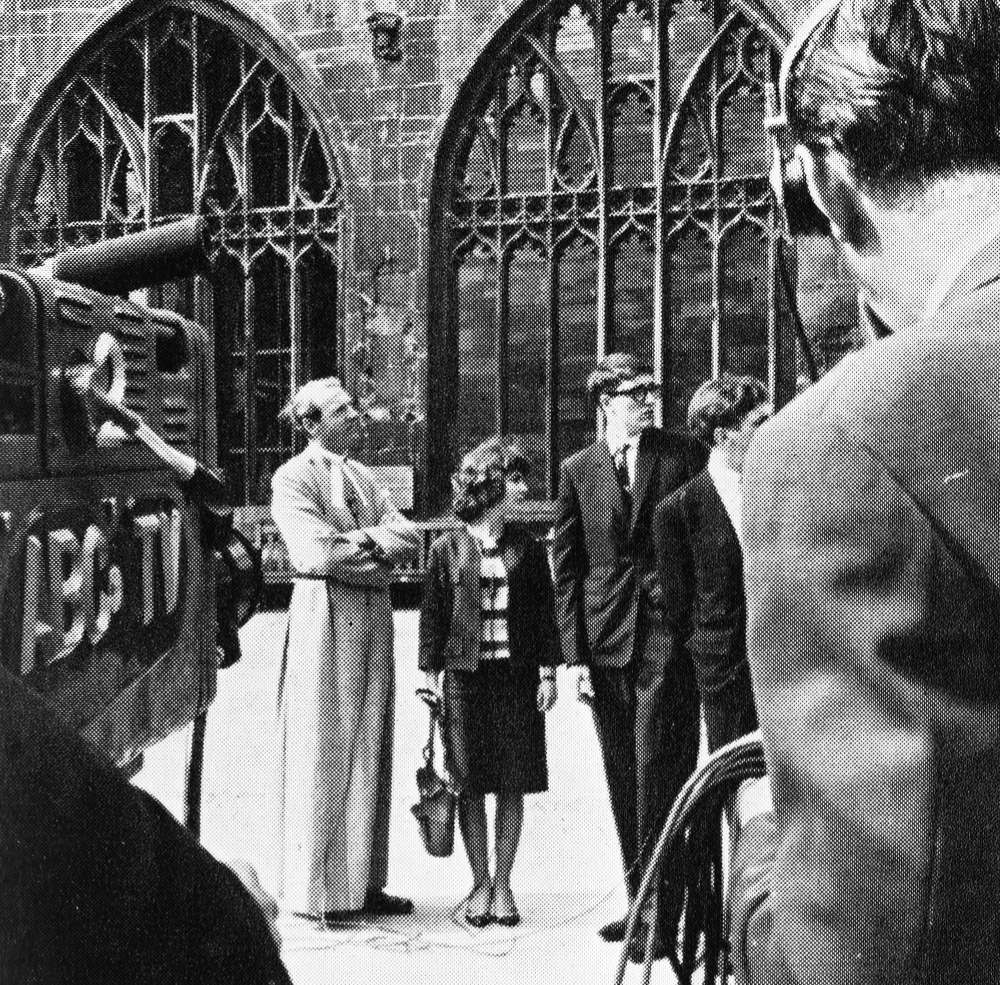 The youth club had to be authentic and I engaged Penry Jones, trained in the Iona Community and running a Glasgow youth club, to join us in Manchester, and start up in March 1958 a young people’s club in the studio. For the title I lifted the description Bernard Sendall of the ITA had always used in the minutes of the SCC meetings where I had begun my campaign, Sunday Break.

The concept appealed to the clergy and we had enthusiastic support at all levels, especially from the late Cardinal Heenan, then at the new Liverpool Cathedral, who came over to our Manchester studios regularly for his chats with teenagers, always impromptu and with no subjects barred. The relaxed and carefree atmosphere of the programme, together with the frank discussions on all aspects of religion and morals, was something new in religious broadcasting and Sunday Break attracted a regular audience which has never been exceeded in size. The most memorable programme was a pop music version of the crucifixion, A Man Dies. This had been written and produced for a public performance in Bristol by a local church youth club and when I played over the sound recordings I decided to devote the whole forty-five minutes of Sunday Break to it.

RELATED  The pace of drama

As soon as we announced the decision there were outcries of protests at such blasphemy. This began in the press, spread to the House of Commons, and was echoed at the meetings of the Authority and by my own Board. Because I had read the text and heard the recordings, I was fully aware of its deep sincerity and religious mood, and felt I was on sure ground in resisting those who were criticising something they had not seen. On the Sunday morning a few hours before the 6.15 broadcast I had a complete dress rehearsal of the programme relayed to London, where the programme was viewed, in separate buildings, by the Authority and by my Board. After the closed circuit transmission Sir Robert Fraser telephoned me at Birmingham and told me with much feeling that everyone had been very moved by what they had seen and of course there could be no objection. The message from my Board too was equally heartening. Finally, A Man Dies was a remarkable success and had to be repeated. Gramophone recordings were made and sold, and we printed complete versions of the script and songs for the youth clubs and religious groups throughout Britain anxious to stage their own versions. In many ways A Man Dies was television’s predecessor of the stage and film musical versions of the story of Jesus Christ.

ABC continued to study the specialised needs of its Sunday audience. We made an interesting experiment with children’s programmes to find out reactions to series of half-hour science fiction serials. I had asked Sydney Newman if his drama department could produce these programmes for children, and their range stretched from Valley of the Monsters to Pathfinders to Venus. However, many parents, critics and ITA representatives had expressed concern to the effect that such entertainment might disturb children. As so little practical research was available I asked our children’s programme consultant, Mary Field, if she would work on this with Professor Arnold Lloyd, Head of the Department of Education at Cambridge. I remembered the infrared photograph Mary Field had taken at children’s Saturday morning film shows to capture their reactions. We decided to apply a similar method to television viewing. It was impractical to put film or television cameras into an ordinary home to record children’s normal responses, so we decided the next best method was to reconstruct a home in a studio and hope that children would behave naturally even though in a contrived situation.

With the co-operation of the Middlesex Education Authority three boys and five girls (three aged ten and five aged thirteen) were invited on a Saturday afternoon to the ABC studios at Teddington, ostensibly for a demonstration of a television camera. Whilst one group toured the premises the others were asked to wait their turn and sit in a small studio, where they could spend the time watching a recorded programme.

I quote from Sydney Newman’s observations, written for an illustrated booklet we published at the time on the experiment:

‘What a humiliating, funny, illuminating and humble-making experience this experiment on children’s reactions was for us, the makers of this programme. For about eighteen of the twenty-five minutes of the running time the thirteen-year-old test group paid no attention to the programme whatsoever! To what we thought was terrifying footage of primeval monsters trying to kill one another, a ten-year-old exclaimed, “Oh, they’re models!” However, we learnt many things.’

The footnote to this was that we were then considering a proposed programme called Dr Who. But we came to the conclusion that the Authority would never allow us to broadcast it. When Sydney Newman joined the BBC he took Dr Who with him.