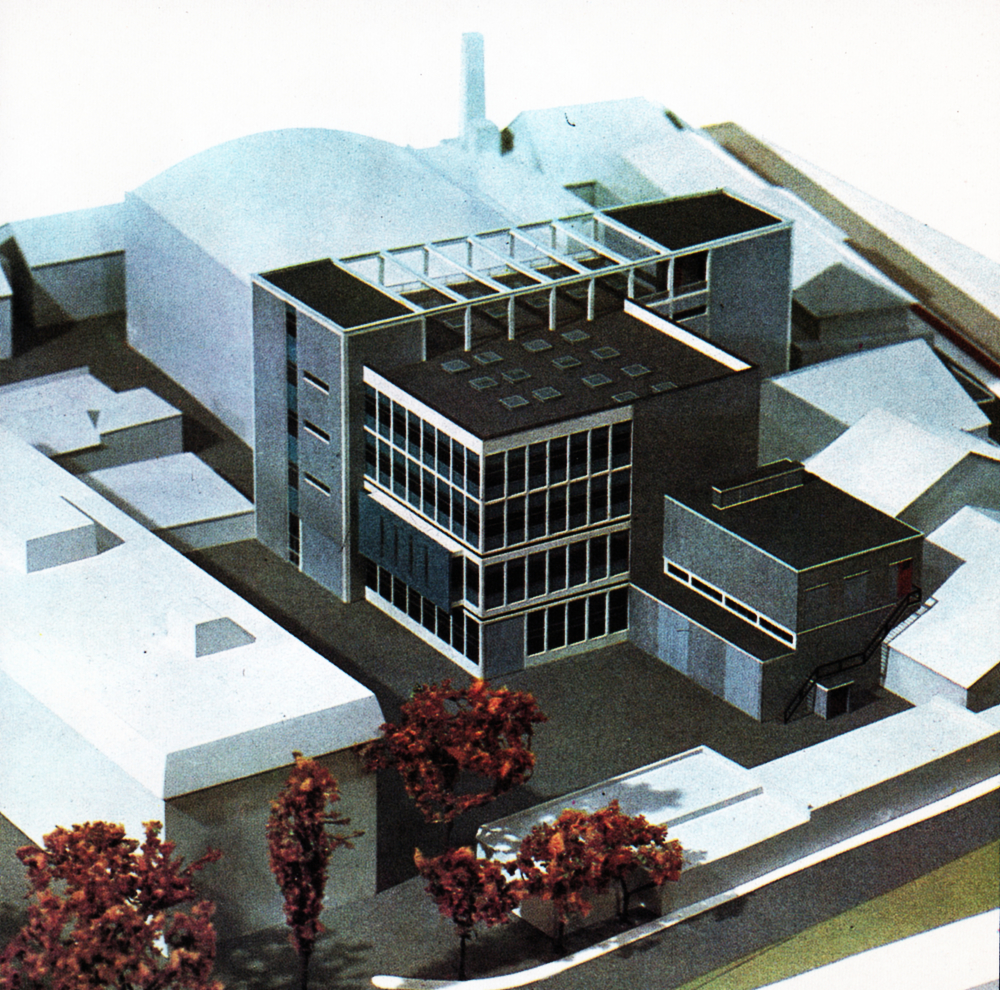 Future trends must be considered together with present requirements in the planning of any production line. Plant has a limited life; there must be room to grow; the quick reorganisation of equipment, demanded by new, more advanced methods of manufacture, must be easy. Truisms all, but particularly pertinent to television; a virile young industry, learning fast, changing with the pattern of public demand, and growing at the accelerated pace of all development in electronic processes.

As a company ABC TV has always been very awake to this changing face. While establishing its resources, it has also been especially busy anticipating the demands of promising and probable developments. A switching of line standards was something to expect. The arrival of colour television was another. Decisions have now been taken on the standards, but in 1959-when the new technical block was being planned for Teddington – the question was still wide open, and suggested the adoption of equipment that would work equally well on 405, 525 or 625. Fortunately manufacturers, too, were then beginning to recognise this need and cameras and monitors designed for quick switching between standards were on the way.

But as very little had been done to produce equipment for signal switching and distribution in a multi-standard form, ABC engineers started development along these lines themselves. And with the obvious advantages then being offered by transistorisation they naturally concentrated on designing equipment that employed this new technique to the full. The result has been a complete range of modular devices for the routing of signals, and with a performance capable of handling colour-another facet of the future that ABC had been investigating in the most practical way possible, through experimentation.

As the BBC were already putting a great deal of effort and brainpower into their design for British colour television, based on the American NTSC system, ABC decided that any experimental and development work they did would be of more value if directed at the embryo SECAM system. Out of this pioneering work, done with the co-operation of GEC, has come some very worthwhile equipment refinements, real flexibility and a lot of novel advantages in the arrangement and design of their technical facilities, and a valuable familiarity with the problems that colour television will bring. And, most practical of all, it has now led to the SECAM system being given high-power transmission trials.

One of the best examples of the Company’s foresight is embodied in the very skeleton of the new Teddington block. With the future promising an influx of new equipment, and new applications of technical space calling for massive reshuffling of facilities, ABC introduced a unique element into the design of the block. The entire floor of the technical area is a pre-cast concrete network of one-foot square holes, supported over a void that can be pressurised with fresh air during operation and is deep enough to crawl in. 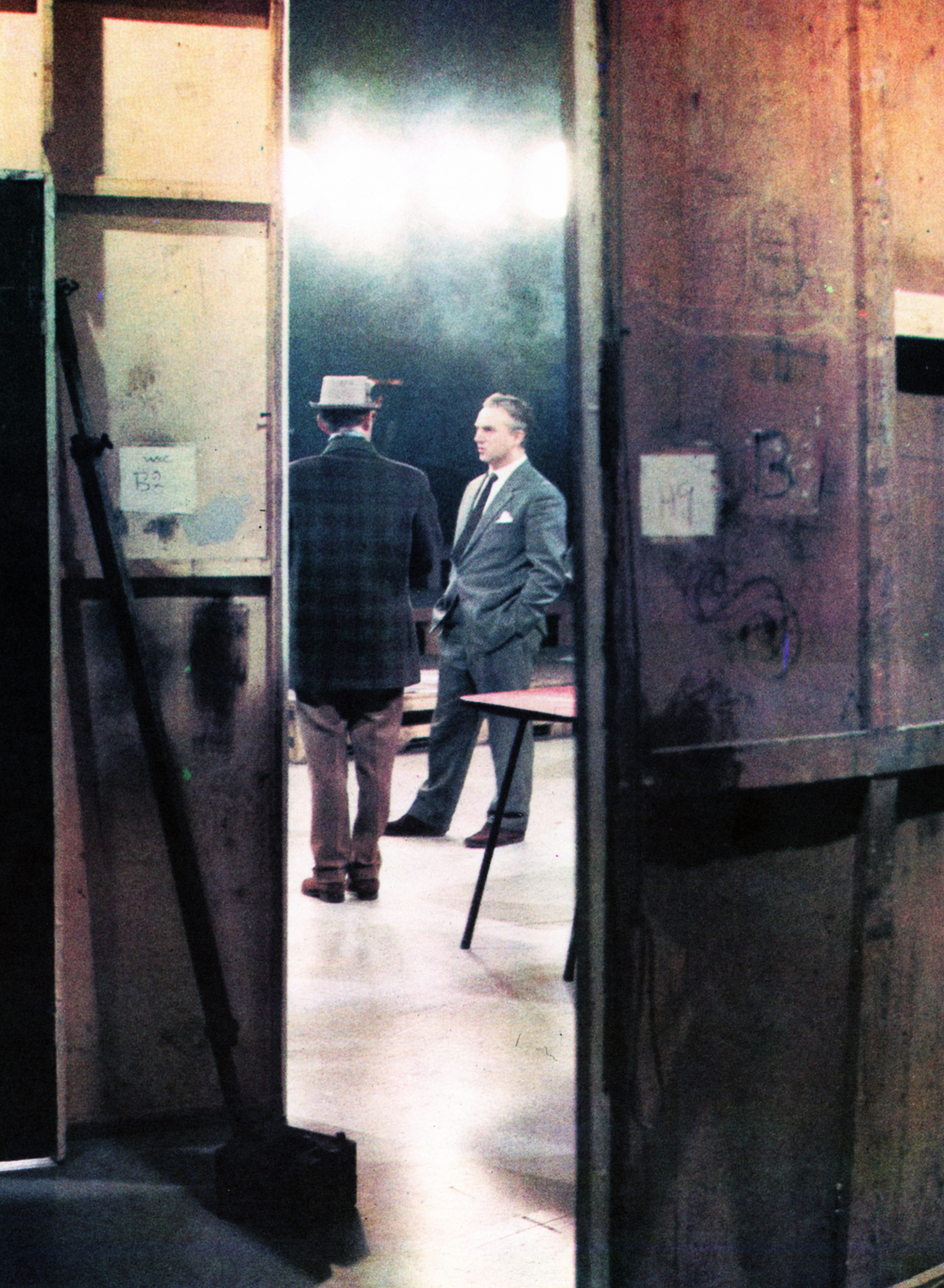 Six Al Read Shows and six Dave King Shows have already been recorded, but are not as yet scheduled. And later this year, two new comedy thrillers are slotted. Green for Danger, starring Hughie Green, in the summer on Saturdays: and Strangers in Paradise, a Hattie Jacques series for the autumn.

In the picture from the Manchester studios: a backstage view of Al Read’s back!

Above the ceiling is a similar void that can be exhausted. As a result, equipment can be placed wherever it is needed, and supplied with cooling air and cables simply by cutting corresponding holes in the tiles covering the floor and ceiling grills. Other examples of their eye to the future can be found in the equipment they have chosen; telecine and VTR machines that are instantly switchable between line standards, easily and quickly adaptable for colour; lighting installations with sufficient reserve capacity for colour productions. Or in the arrangement of their facilities; the interlocking of production areas and routing of signals through one, central apparatus area; the special VTR suite equipped for electronic editing. 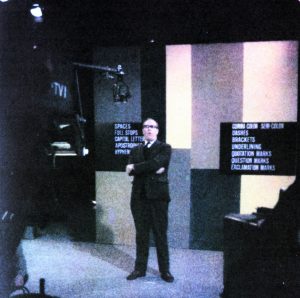 A dream realised. On January 20 1963, ABC TV presented the first editions of Headway, a twin programme series of adult education. It was a long-awaited moment, for ABC had urged for some years that adult education must have a place in the programme schedules.

The first 13 editions of Headway – recorded from Manchester – are concerned with modern English language and the ways in which it is used. Here Pit Corder, Leeds University Lecturer in English, conducts a programme in the series ‘Pen to Paper’. The next programmes will deal with logic and citizenship.

Perhaps the best composite example of ABC’s planning is Teddington as a whole. It is one of the most modern studio centres in Europe. But the drive towards tomorrow is the same throughout the Company.