David Hamilton says goodbye to ABC’s home in the North. 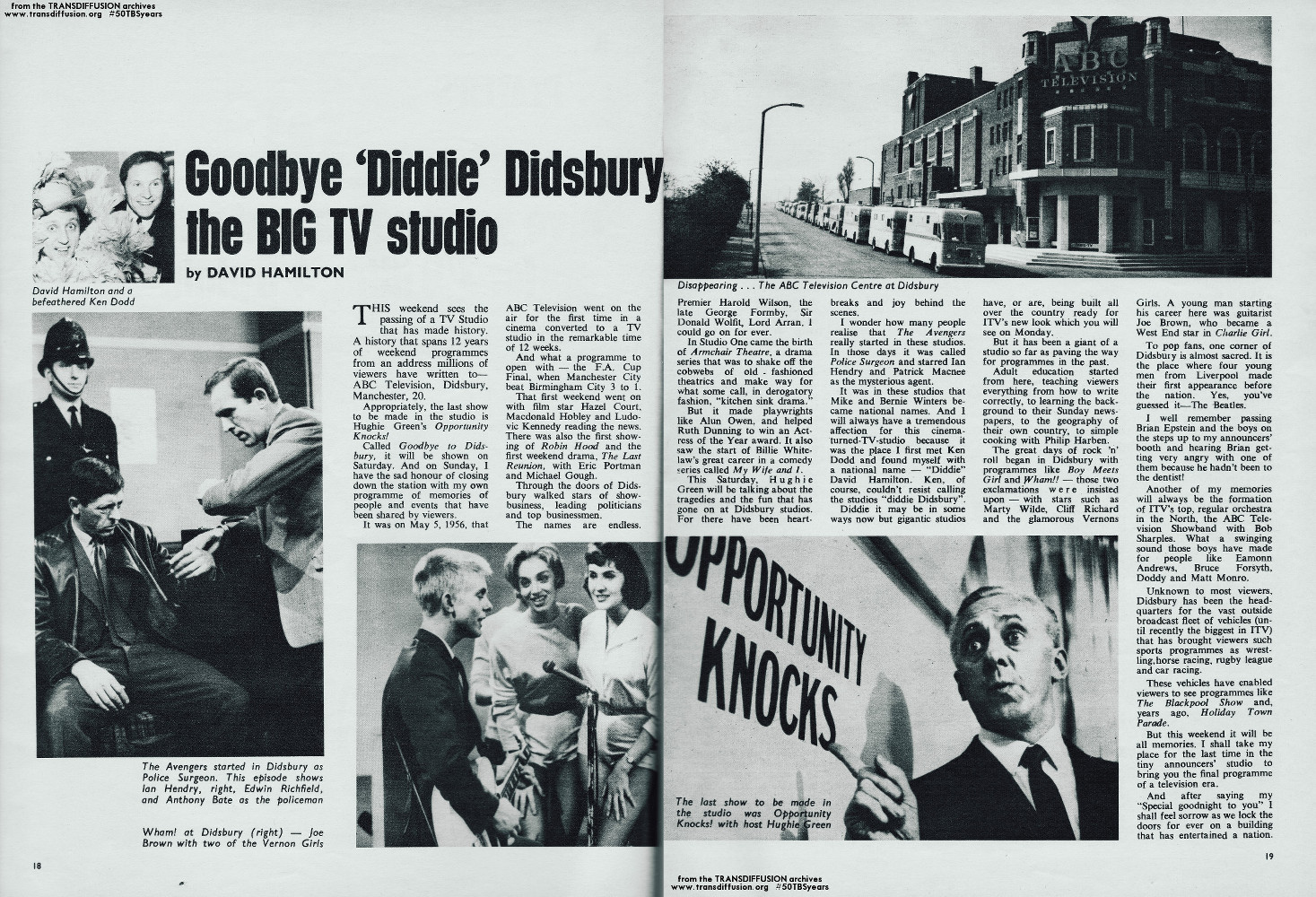 This weekend sees the passing of a TV Studio that has made history. A history that spans 12 years of weekend programmes from an address millions of viewers have written to – ABC Television, Didsbury, Manchester 20.

Appropriately, the last show to be made in the studio is Hughie Green’s Opportunity Knocks!. Called ‘Goodbye to Didsbury’, it will be shown on Saturday. And on Sunday, I have the sad honour of closing down the station with my own programme of memories of people and events that have been shared by viewers.

It was May 5, 1956, that ABC Television went on the air for the first time in a cinema converted to a TV studio in the remarkable time of 12 weeks.

And what a programme to open with – the F.A. Cup Final, when Manchester City beat Birmingham City 3 to 1.

That first weekend went on with film star Hazel Court, Macdonald Hobley and Ludovic Kennedy reading the news. There was also the first showing of Robin Hood and the first weekend drama, The Last Reunion, with Eric Portman and Michael Gough.

Through the doors of Didsbury walked stars of show-business, leading politicians and top businessmen. The names are endless. Premier Harold Wilson, the late George Formby, Sir Donald Wolfit, Lord Arran. I could go on forever.

In Studio One came the birth of Armchair Theatre, a drama series that was to shake off the cobwebs of old-fashioned theatrics and make way for what some call, in derogatory fashion, “kitchen sink drama”.

But it made playwrights like Alun Owen, and helped Ruth Dunning to win an Actress of the Year award. It also saw the start of Billie Whitelaw’s great career in a comedy series called My Wife and I.

This Saturday, Hughie Green will be talking about the tragedies and the fun that has gone on at Didsbury studios. For there have been heartbreaks and joy behind the scenes.

I wonder how many people realise that The Avengers really started in these studios. In those days it was called Police Surgeon and starred Ian Hendry and Patrick Macnee as the mysterious agent.

(Editors’ Note: David Hamilton’s memories and those of the TVTimes caption writer are at variance with the established facts of The Avengers. Although the first – live – series did star Hendry, he was not playing the same character he created in Police Surgeon.)

It was in these studios that Mike and Bernie Winters became national names. And I will always have a tremendous affection for this cinema-turned-TV-studio because it was the place I first met Ken Dodd and found myself with a national name – “Diddie” David Hamilton. Ken, of course, couldn’t resist calling the studios “diddie Didsbury”.

Diddie it may be in some ways now but gigantic studios have, or are, being built all over the country ready for ITV’s new look which you will see on Monday.

But it has been a giant of a studio so far as paving the way for programmes in the past. Adult education started from here, teaching viewers everything from how to write correctly, to learning the background to their Sunday newspapers, to the geography of their own country, to simple cooking with Philip Harben.

The great days of rock ‘n’ roll began in Didsbury with programmes like Boy Meets Girl and Wham!! – those two exclamations were insisted upon – with stars such as Marty Wilde, Cliff Richard and the glamourous Vernons Girls. A young man starting his career here was guitarist Joe Brown, who later became a West End star in Charlie Girl.

To pop fans, one corner of Didsbury is almost sacred. It is the place where four young men from Liverpool made their first appearance before the nation. Yes, you’ve guessed it – The Beatles.

I well remember passing Brian Epstein and the boys on the steps up to my announcers’ booth and hearing Brian getting very angry with one of them because he hadn’t been to the dentist!

Another of my memories will always be the formation of ITV’s top, regular orchestra in the North, the ABC Television Showband with Bob Sharples. What a swinging sound those boys have made for people like Eamonn Andrews, Bruce Forsyth, Doddy and Matt Munro.

Unknown to most viewers, Didsbury has been the headquarters for the vast outside broadcast fleet of vehicles (until recently the biggest in ITV) that has brought viewers such sports programmes as wrestling, horse racing, rugby league and car racing.

These vehicles have enabled viewers to see programmes like The Blackpool Show and, years ago, Holiday Town Parade.

But this weekend it will all be memories. I shall take my place for the last time in the tiny announcers’ studio to bring you the final programme of a television era. And after saying my “Special goodnight to you” I shall feel sorrow as we lock the doors for ever on a building that has entertained a nation.

David Hamilton is a British radio presenter. Since his broadcasting career began in 1959, Hamilton has hosted over 12,000 radio shows and more than 1,000 TV shows. He is usually known as 'Diddy David Hamilton' which was a name given to him by the successful British comedian Ken Dodd.

Goodbye ‘Diddie’ Didsbury the BIG TV studio
It’s a race against time
Lights: at the touch of a button
Inside ABC's last day